Three years is a long time to find out if your collected tree has made enough root in the right place to enable you to pot the tree into a training pot. I had reached the stage where the BIG yew was ready, would there be enough root, would it fit into the BIG pot I had prepared, could I make this big heavy tree stable and secure?

My good friend David Barlow was there to help me. David is a superb engineer and this tree would require some clever sub soil engineering to make it stable.

The tree was suspended between two plant pots so that I could work to remove the plastic pots easily. David held the tree and I set to work. I was very pleased with the amount of new root the tree had made.

When the tree was collected very little root was on the tree, careful maintenance and a strict regime of misting, feeding, placement had brought the tree on well… I was happy to start the work.
The Yew had been planted in a VERY open soil mix of Acadama, Grit and pumice and a small amount of orchid bark. This ensured good drainage and an easy media for root growth.
Once the old plastic pots had been cut away the roots could be inspected closely, I decided to cut away eight inches of root so that the tree would sit well in the pot. I was aware of the old deep root from the time that the tree was collected (photograph EVERYTHING) had I not removed this the tree would have not have looked stable in the pot.
I would have liked to have had the deadwood at the base of the tree overhanging the pot, BUT when the tree was positioned in the pot it simply did not work, it had to be removed!

Two hardwood blocks were employed to stabilize the tree, they were fixed in place with copper wire. The base of the tree was drilled and 4mm Copper used to tie in the tree through the holes in the base of the pot.
I used large size pure Acadama in the potting as this had proved very successful on previous potting of large Yew in my garden. Once the soil was filled to the rim of the pot the drama created by the base of the tree could be enjoyed. This was important as the visual weight of tree required a strong base to sustain the appearance of a massive tree.
The first styling of the tree with the basic branch structure put in place was in November, this potting was two months ago and the tree has responded well. I guess it will be AT LEAST ten years before this tree is ready for showing… BUT it will be worth it. 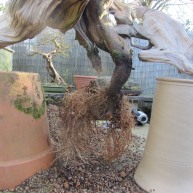 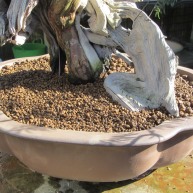 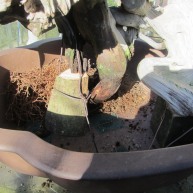 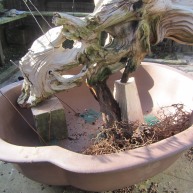 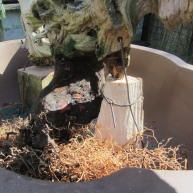 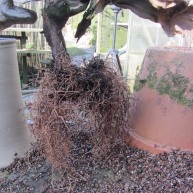 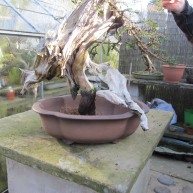