I am off grid for a few days as I am in the wilds and out of net range so I will not be blogging for at least 5 days dear readers… on my return I will have lots of posts ready to go…hopefully.

This is my personal review of the Blog over the last 12 months, if you have missed any of these they are all available in the ‘Past Posts’ archive that you can access in the column on the right of the page.

In January I wrote 26 posts that included many ‘archive’ stories from visits and articles that I had written over the years, these continued into February with a further  32 posts. It is not possible to maintain that level of quality content throughout the year with a low point in June and July each with only 5 posts, the reason was simple… I was busy with actual bonsai in my garden!

One of the early highlights was the video of repotting and repositioning of the Fat guy Hawthorn, this has had over 22,000 views on YouTube. My coverage of the Noelanders Trophy also received a very high visitor rate. BUT my favourite entry was the video from Le Bonsaï Club du Léman BEST bonsai event Video EVER!

One of the purely ‘teaching’ posts was “Building a heating bed for overwintering Bonsai and Yamadori” this has been one my most popular posts with lots of email questions from visitors to the blog.

In February I started my ‘Bonsai Potter showcase’ series. Over the last 11 months  I have video ‘interviewed’ 11 potters across Europe and they have been very forthcoming with sharing techniques, ideas and experiences, I still have many more potter to chat to… so keep watching.

March is a busy time for me as it’s the moth that I collect Yamadori in earnest, on one of my trips I came across some of the oldest Yews Trees growing in cliffs in Europe quite amazing.

In April I was busy planning my upcoming Tour of Europe  that was taking place in May, My post on Hawthorns coming into leaf and using my new photo set up for the first time created a lot of traffic.

May was my month away from home Touring Europe and at the end of the month I visited Israel. When I travel I take my ‘tech’ with me and I was able to post almost daily on my travels. I have quite a few ‘trips’ organised for 2013 so expect more of the same J

June I was busy in my garden so posted archives from Israel.

July was the month I had waited 3 years for, where I was to cut my large Yamadori yew into two trees My very good friend Terry foster was on hand and the subsequent carving and sandblasting proved popular videos.

September I posted mostly archive content including “bonsai is NOT expensive” one of my many ‘rants’ on my Blog.

October was the build up to Burrs 2012 so I posted mostly ‘archive’ content.

November and Burrs 2012 was at the start of the month, this gave me a huge amount of content for the blog, I also commissioned a Professional Video of the event

December my post on Mizu Goke and the benefits to bonsai by Owen Reich was a real honour for me to post. Owen recognised that I have a long reach with the blog and he wanted to take advantage of that to engage a wide audience  (over 3,260 people follow the blog).

I launch my blog almost 12 months ago; I have posted 133 times and received 305 comments, over 366,000 views, 7,566 on my busiest day.  I wanted to be entertaining, inspiring, sharing, and teach, I hope I have done that well and engaged with the wider bonsai family both in the UK and beyond.

I have know many of the members of Wirral Bonsai Society for quite a few years and have spoken there on a few occasions. A truly active club and a model for others to follow. They have an annual show who’s quality is extremely high.

“New members are always welcome, just come along to one of our monthly meetings at the RAFA club. You can even ‘try us out’ for a few months before you decide on joining as an official member. The meetings are informal (there’s a bar!) and the club members are (mostly) friendly, approachable and happy to pass on guidance and information to anybody interested in bonsai- whatever your level of experience.”

I recommend anyone who is interested in joining a very active club and is within an hours drive to consider Wirral. one of the best in the North West of the UK

In November this year I will be hosting the Burrs VII, Burrs Workshops was introduced as a new way of learning the art of bonsai, in a purpose built training centre, huge warm and well lit workshop, full catering and expert help from some of Europe’s top award winning Bonsai artists.

The reason that Burrs is so successful is based on simple ideals. Employ the best bonsai artists, encourage participants to be open minded to possibilities, sharing of ideas and techniques and Time. The most important being Time… Burrs starts on Friday evening and ends on Sunday afternoon, more than enough time to complete a large tree, forest group or lengthy work on any number of trees.

Here is what participants have said about the workshops

“I want to thank all of the people at Burrs this year – my debut appearance. I was made most welcome from the moment I arrived. Many people offered me advice on my trees, bonsai in general … and life in general! Many more people tried to improve my poor wiring technique, I was well fed (thank you so much to Carolyn), I’ve made new contacts/friends, I have already met a couple of particularly great Burrs people after the event and intend to build on that and my head is still spinning with everything I learned.” Matt Addie aspiring bonsai artist

“Burrs is like no other bonsai event I have ever attended,  I struggle to find suitable adjectives to describe how unique an experience it is. I guess for me the best way to describe it is that 30 or so people fill the room with passion for Bonsai, for the whole weekend, and you have to experience that to appreciate it. This is what makes Burrs unique. You can learn so much without even working a tree. John Pitt Potter.

“If Carlsberg did Bonsai Workshops they would not even get close to a Burrs weekend”.Please please pencil me in for the next November workshop” Andy (Stone Monkey) Pearson

Burrs workshops have grown from strength to strength over the last seven year,many 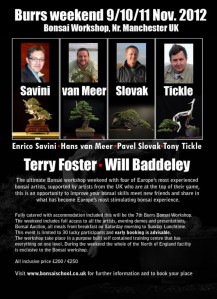 great bonsai have started their life at Burrs, and many participants have been inspired to create great bonsai. I am fortunate to have Terry Foster one of the UK’s most talented bonsai artist as my right hand man, and Carolyn (my amazing wife) who handles all the administration and catering (there is a whole new blog post in itself!)

Burrs VII is set to be the biggest and best yet with 15 participants already signed up. Take a look at the poster and Video’s and book your place before it’s too late.

I forgot to mention… Burrs Bonsai Workshops is probably the best fun weekend you will have in bonsai.

A short walk around the bonsai market at the Noelanders trophy, it was VERY busy!