I have been sent this article to publish from my friend Owen Reich who is studying at Kouka-en in Osaka, Japan. It’s an in depth study of Mizu Goke and the benefits to bonsai.

Upon my arrival to study in Japan, one of the first things I noticed about the bonsai here was that the surface of many of the trees were covered with chopped sphagnum moss. My broken Japanese questions were answered with a smile, as mizu goke is an integral part of bonsai care here at Kouka-en and other nurseries in Japan. Proper watering is the most important cultural practice for bonsai and any edge you can get should be considered for use.

Mizu goke means water moss, referring to the environment sphagnum moss naturally grows in. To avoid confusion, mizu goke will be referred to as “moss” and green, living moss as “live moss”. You should never leave live moss you applied for exhibition on indefinitely as it uses water, decreases the oxygen exchange for the bonsai’s roots, and makes monitoring for dry bonsai more difficult. It is best to apply live moss before exhibition or display in small chunks like a puzzle. This keeps the air exchange rate higher than using large sheets.

There are a myriad of benefits for the use of mizu goke. The most common use is for newly repotted bonsai to stabilize the soil surface and evaluate root system health. Sick bonsai due to weak roots can be better monitored as can newly collected yamadori. Moisture sensitive trees and almost all shohin bonsai benefit a great deal as the hotter times of the year can be especially difficult to provide adequate moisture in a timely fashion.

Stewartia monadelpha a.k.a. Himeshara (meaning dwarf stewartia) thrives even in warmer climates as moss keeps the soil temperature lower; best recreating the cool, moist environment they naturally grow in. Trachelospurnum asiaticum var. ‘Nana’ a.k.a. Chiramen kazura (meaning handsome climber) is another species that hates to dry out completely. All of the chiramen kazura and himeshara at Kouka-en are maintained year-round with moss covering the surface. Another reason to adopt the use of moss is the uniform covering will decrease the incidence of new weeds and it’s easier to spot new ones early for easy removal. It will not unfortunately, not kill all the old ones.

Mizu goke can be used for any species, but it will take some close observation the first time you apply for evaluation of your soil mix and local climate. We don’t use it for ancient Pinus parviflora or Shimpaku as the larger particle akadama used doesn’t shift easily and water needs are well known. Kouka-en uses blended Aoki akadama mixs for everything (a separate deciduous and evergreen mix) with a larger size of high fired akadama as a base to decrease the zone of saturation. This is the area that stays wet between waterings in the bottom of the pot. Satsuki azaleas are grown in Kanuma with a high fired akadama base. Long fibered Australian peat moss is used here in Osaka for mizu goke, but Canadian long fibre peat moss will be readily available at garden centres or craft stores in America. Just make sure it is beige to brown colour that isn’t dyed. Mizu goke is best prepared by soaking the dry moss in a container of boiling water and left to sit for three hours to fully saturate the dry moss. Next, a large chopping knife is used to cut the moss into a fine particle size. The sm 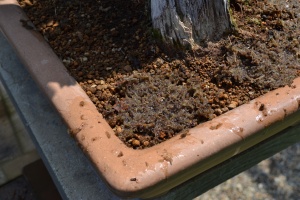 aller the size, the more uniform the application will be to the soil surface. After mincing is complete, the moss is put into buckets of water for immediate use. The ratio of water to moss is important as too much water will make it hard to remove the moss. Too much moss tends to make the moss form clumps and can lead to an uneven final thickness on the surface. It will take some practice to perfect the ratio. When preparing enough for later use, the wet moss is mounded up in flats with small drain holes in the bottom and allowed to dry. If not used soon after preparation, it is best to allow the mizu goke to soak in a bucket overnight or at least three hours before use. If too dry, application will be difficult and increase the incidence of a wavy surface that dries sporadically. If left in a bucket for more than a day or two, add new water to provide oxygen otherwise the moss with start to go anaerobic and smell bad.

Surface preparation is straightforward for newly repotted bonsai, as the soil surface should be made level or with a slight slope away from the tree already. It is best to make the final soil level a centimetre lower than normal before mizu goke application. On established bonsai, any old live moss is scraped off the surface save very close to the nebari on evergreens with flaking bark such as Pinus thunbergii as this area is usually left undisturbed during repotting. The mizu goke should be applied in a thin layer over all new soil. Again, this aids in keeping the soil from washing away or shifting so the surface is smooth and level. If you prefer to keep your soil surface “green”, live moss can grow in or through the mizu goke and re-establish itself at a uniform height. If a more diverse live moss covering for exhibition is desired, moss can be applied over the mizu goke if space allows or it can be scraped off once the root system is stabilized after application. This stabilization may take 3 months or longer. Many of the bonsai in the Kokofu Ten Exhibition are repotted during the months preceding the show in February into beautiful, and generally old and extremely expensive, pots. After the exhibition ends, the trees are potted back in their normal pots, terra cotta containers, or wood boxes. Moss is often applied at this point as the trees have gone through many stressors; not the least of which was almost two weeks inside an exhibition hall with dry air and low light levels. It is a testament of skill to the professionals involved that the bonsai masterpieces exhibited remain healthy during and after running such a gauntlet. 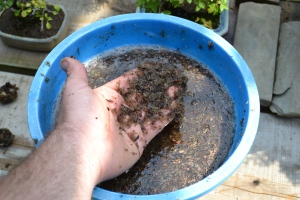 Mizu goke application is done by making a shallow skimming-scooping motion into the bucket and almost slapping the thin layer in your hand onto the soil. Grabbing a big handful and spreading it around is less accurate. At a minimum, moss should be applied over all new soil around the perimeter of the pot. Deciduous trees are covered from the edge of the pot to the nebari leaving these surface roots uncovered as it will decrease the incidence of adventitious roots in the wrong places and just looks better. As mentioned earlier, evergreens don’t need moss covering the undisturbed soil. Also, a little bit of the overall surface devoid of moss can also aid in assessing water needs. Next, a curved edged, flat soil tamp like the ones often opposite the business end of bonsai tweezers should be used to press the moss down to form a slight outward slope on the inside edge of the pot. Finally, a clean dry rag will aid in the removal of excess moss on the pot rim. Once dry, mizu goke will stick to the pot and is unsightly and harder to remove. 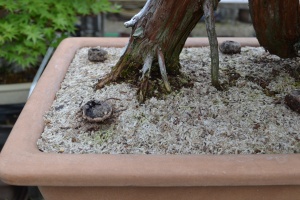 As the new moss dries, it will lighten in colour. This is how to better judge when to water. If applied to established bonsai, it will dry faster and when visually dry, it’s time to water. Newly repotted bonsai will dry out slower and watering rates need to be watched closely. It is best to let the moss dry out to the point of looking like caked oatmeal early in the stabilization of new root systems; sometimes watering just the older part of the root system closer to the trunk is advisable as this is where the new fibrous roots will emerge. As time passes after repotting, the rate at which the moss dries can be tracked and used to judge the vigour of your bonsai. Really long drying times between waterings are a sign of a weak root system. It may be time to apply a suitable fungicide. At times, patches of moss can wash away. Just apply some new moss in the same fashion. The moss will sometimes turn green due to some sort of algae. If too much of the surface turns green, the old moss can be removed and new moss applied. If your moss turns green all over, you are most likely watering too much. Fertilizer cakes will discolour the moss under them but this is no reason for concern.

The water needs of any species should be learned from bonsai professionals, seasoned local club members, or researching the plant’s native habitat. Mizu goke is not a cure-all for how to time your watering. Moss is not going to fix any bad habits either. It is however, a reliable aid in bonsai culture when used properly and may provide an “Ah-Hah” moment for bonsai you had trouble keeping healthy in the past.